July 2018 Female Mathematician of the Month 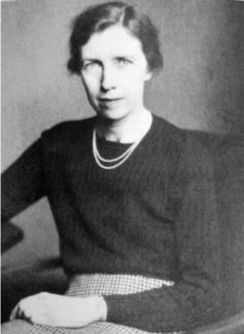 Mary Cartwright was a mathematician whose discoveries would not only aid in the defense of Britain during World War II, but lay the groundwork for a whole new field: chaos theory. Mary Cartwright was born on December 17th, 1900 in Northamptonshire, England, the middle child of five. When she was eleven years old, Mary Cartwright was sent away to school, first attending Leamington High School, then later attending the Godolphin School in Salisbury. Her best subject at school was history but it had the disadvantage of requiring much effort in learning endless lists of facts. When she was encouraged in her studies of mathematics in her final year at school, Mary realized that it was a topic where one could succeed without the long hours of learning facts. It became the topic that she wanted to study at university. In 1936, Cartwright became director of studies in mathematics at Girton College, and in 1938 she began work on a new project which had a major impact on the direction of her research. During her career, Cartwright published over 100 papers in classical analysis, differential equations, and related topological problems. She made ground-breaking contributions to chaos theory. Cartwright collaborated for many years with John E. Littlewood on the solutions to the Van der Pol equation. Besides the academic value of the team’s discoveries, the work also enabled significant practical improvements to the radio amplifiers used for communication during World War II. In 1945 she published a simplified proof that Pi is irrational and in 1947 she was made a Fellow of the Royal Society, the first female mathematician to be so honored. In addition to chaos theory, Cartwright is credited with important work in mathematics on the theory of functions and differential equations, summations, integral functions, maximum and minimum moduli, and numerous others.

Inspiring the mathematician in every girl